Second in a limited edition 10-inch series, this time on green vinyl. Each of the six releases will feature a different color of vinyl, leading up to release of the complete "Broken Sunlight" album. Digital download card included.

As a member of the critically acclaimed, gold-selling Jurassic 5, DJ Nu-Mark graced the group with precision scratching and cutting-edge production. Best known for spearheading the raw anthem "What's Golden", such creativity only hinted at the visionary songs and styles Nu-Mark has explored since Jurassic 5's breakup in 2006.

Now, after more than three years of brainstorming, experimenting and collaborating, he has finished his debut solo album "Broken Sunlight", which reveals his influences and innovations into a jaw dropping collection of heart felt music. "A lot of things in my life were broken, my group broke up, my long term relationship broke up, the music industry and economy seemed to be broken so It was time for me to take a break", Nu-Mark explains. "And that's where the title of the record stems from. It's not so much I'm broken. I'm moving towards the sunlight these days. It's more like a tale of perseverance and forging ahead through difficult times. 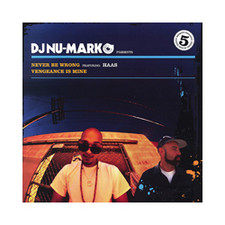