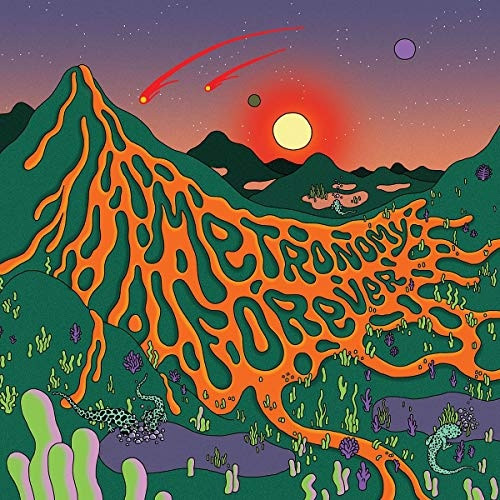 While Metronomy have spent their career hopping slickly from one genre to another, until now the shifts have come between albums, rather than within them. Whether the rudimentary bedroom electronica of 2006’s Pip Paine (Pay the £5000 You Owe) or the Motown genuflections of 2014’s Love Letters, each LP has had its own distinctive sound. Metronomy Forever, however, is a wilfully eclectic glide through seemingly disparate genres, often within the same song. That it works is testament to mainman Joe Mount’s pop nous, which has evidently been further honed by his recent work with Robyn.

Lately is gorgeous synth-pop; Whitsand Bay is delicately understated languorous indie; the angular rock of Insecurity swaggers more than its title suggests; and Sex Emoji (yes, I’m afraid so) channels Parade-era Prince. Upset My Girlfriend, meanwhile, blends downbeat acoustic strumming and emo lyrical introspection with a parping synth line that ought to be incongruous but fits the melancholy mood. Elsewhere, elements of yacht rock, funk and 80s disco flash in and out of songs. There’s so much to take in that it requires many listens before all of Metronomy Forever’s charms reveal themselves, in part because of the palate-cleansing interstitial drones spread across the album. It’s worth the wait.