Kevin Martin (a.k.a The Bug) cherry-picks the first of two volumes comprising cutting-edge electronic riddims from the likes of Diplo, Harmonic 313, and the Bug himself, plus radical Digi-Dancehall innovations from a posse including Lenky, Steely and Clevie, Dave Kelly and many more. The hardcore pickers will no doubt know many of these tracks, but the blend of outside producers and straight-up Dancehall may not be familiar to all. On the authentically JA side, we've got some total heavyweights such as Steely & Clevie's 'Streetsweeper', Ward 21 Productions' 'Pit Bull', Lenky's irrevocably influential 'Diwali Riddim' and Lenky & Sly's 'Now Thing'. Coincidentally that last track gave its title to a Mo'wax compilation nearly ten years ago, one with a similar ideal to this album - to turn unsuspecting heads onto the raw, instrumental, and incredibly unique form of Jamaican dance pop which perhaps get overlooked in favour of the vocals. Perhaps closer to home, or just more familiar to electronic types, you'll also find the likes of Harmonic 313's 'Bazooka Riddim', Redlight's deadly 'M.D.M.A', Steretyp's muderous 'Modern Times' and Diplo's kraftwerk-snatchin' 'Diplo Rhythm', among others, helping to strike a fine balance and render the relationships between the two for all to hear. The whole thing is tied up with a sonic fictional concept in graphic novel form by Paolo Parisi, cut loud and housed in gatefold sleeve to cherish for a long time. Highly recommended! 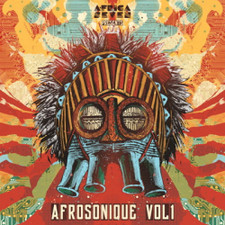