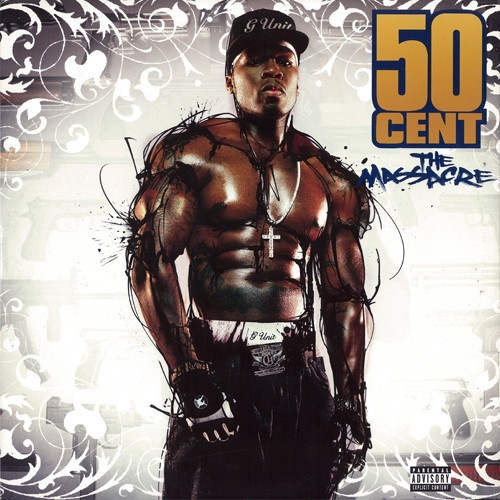 Following up one of the biggest debuts in hip-hop history, crack dealer turned charisma dealer 50 Cent makes some bold moves, recycles plenty of old ideas, and sprinkles in some perfect party singles for The Massacre. Crafty man that he is, 50 must have known following up the massive Get Rich or Die Tryin' was going to be extremely difficult, especially for a rapper rightfully known more for creating headlines than rhymes. To cushion the blow, 50 released an album by his G-Unit crew, made numerous guest appearances on other artist's tracks, and helmed ten mixtapes in his G-Unit Radio series. It kept the debut momentum moving and it's half the reason why The Massacre doesn't feel like Get Rich's proper successor, the other half being the album's effortless attitude. That's the most frustrating thing about the otherwise satisfying Massacre. At worst, it feels unfinished, and at best, it feels like a mixtape cobbled together from mostly choice tracks but without that overseer's polish. At a stunning, slightly overstuffed 78 minutes, it's overwhelming, too, but without a perfect flow to hold the listener's hand the whole way through, it's also a testament to 50 and crew that The Massacre doesn't test your patience until after the one-hour mark. Silly and short intro out of the way, the slinky "In My Hood" gets down to business and gives way to four tracks of the same-old, same-old bravado and beats that are still just as stunning and catchy as hell. "I'm Supposed to Die Tonight" and "Gatman and Robbin" are both great tracks from the quirky/macabre house of Eminem, but it's the Fat Joe-dissing "Piggy Bank" that steals the show. Like "Candy Shop," "Outta Control," "Disco Inferno," and on and on, "Piggy Bank" succeeds because of its serviceable rap, believable swagger, inescapable hook, and phatter than phat beats. For those who've had it with the gunshots, the Shady/Aftermath boasting, and the usual "G-G-G-G-Unit!" shouts, The Massacre has just enough surprises. Besides mentioning Kurt Cobain and Ozzy Osbourne, "A Baltimore Love Thing" is the big shocker as 50 poignantly tells the tale of a heroin-addicted girlfriend destroying all that's good. "Ryder Music" is more easygoing than expected, "Build You Up" (featuring Jamie Foxx) is actually sweet, and "God Gave Me Style" has just about the dreamiest beat in the G-Unit universe. Scott Storch, Dr. Dre, and Eminem are the only big names in the producer's chair, but everyone else serves up fine tracks, especially the great Needlz. Guest spots are kept to a bare minimum and besides the intro, skits are nonexistent. Trim a couple tracks and a couple beefs and rearrange the album and you have what sounds like Get Rich's lesser sequel, but The Massacre doesn't look back. It really just wants to challenge other rappers' albums and not its predecessor. Taken that way, it's an excellent effort.