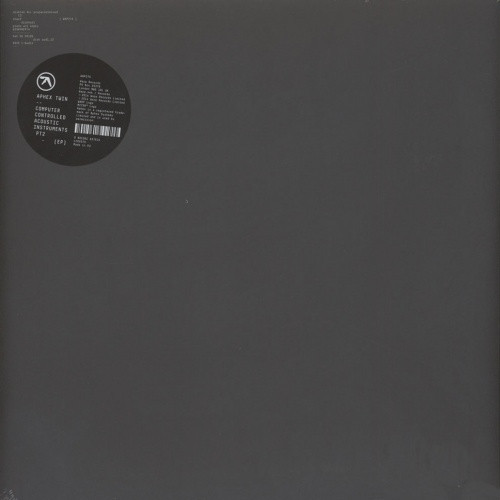 140g LP in spined sleeve with download code card. A crackshot slab from the crackpot producer putting his computer controlled acoustic orchestra thru its paces. As promised or alluded to in various interviews around last year's 'Syro' LP, he's done a proper Pierre (Bastien, Henry, Schaeffer) and manufactured a whole mechanical band of things that hit other things - mainly pianos, drums and gongs - to make a very pleasing sound indeed. It's the sound of an artist exerting optimal control over his instruments but allowing for, or even cultivating the natural infidelities of syncopation and harmonic dissonance in a way that's rarely, if ever, been achieved quite to these standards. Breaking down to thirteen tracks, each between 20 seconds and 5 mins long, he explores that stripped-down palette to its fullest, funkiest, whether accelerating the aesthetics of Gruppo di Improvvisazione and Portishead in the brooding opener, 'diskhat ALL prepared1mixed 13', putting solo pianists out of work with the likes of 'piano un1 arpej' and 'piano un10 it happened', or communing a radiance of gamelan-like keys and metallic tones in its most curious highlight, 'disk prep calrec2 barn dance (slo)'. The closest comparison we could make is with the breaksploits of his 'i Care Because You Do' album mixed with some kind of abstracted Italian Library Record funk aesthetic, which is pretty mad.