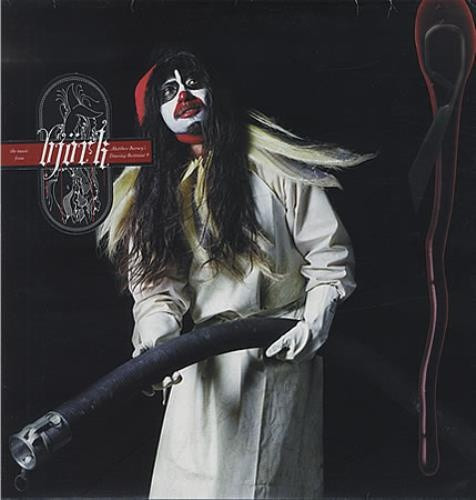 single lp version - Though Björk has written music for films before, her collaboration with Matthew Barney on Drawing Restraint 9 is a much deeper and more natural pairing, which makes sense, considering that they're partners in life (and now in art). Björk's pieces for the film reflect its fusions of the contemporary with the ancient, and the organic with the technological -- themes that she has dealt with in her own work, especially on later albums like Medúlla. The motif of West meeting East is also prominent in the visual and musical halves of Drawing Restraint 9: shot in Nagasaki Bay, the film depicts a pair of occidental guests (played by Barney and Björk) who visit a Japanese whaling ship and evolve into whales to escape drowning when a storm hits. Details such as costumes inspired by Shinto marriage robes, a tea ceremony, and whaling boat culture are echoed in Björk's music: <br/><br/>Drawing Restraint 9 begins with "Gratitude," which uses Will Oldham's vulnerable vocals, a children's choir, and Zeena Parkins' harp to bring to life a 1946 letter written to General MacArthur by a Japanese citizen. Thanking the general for lifting the ban on whaling, the writer's gratitude comes from "my family and the ancient sea," underscoring the film's connections between life, death, sacrifice, and transformation. Meanwhile, the wistful "Shimenawa" and "Antarctic Return" incorporate the sho (played here by sho virtuoso Mayumi Miyata), a Japanese free-reed mouth organ that produces subtle and complex tone clusters that sound organic and ethereal at the same time. The album's climactic track, "Holographic Entrypoint," is inspired by the traditions of Noh theater; the alternately gruff and wailing vocals and wood block percussion are the essence of simplicity, and all the more powerful and eerie because they're so simple. Similarly, "Pearl" pairs the sho with heavy, primal, Medúlla-like rhythmic breathing and gasps that sometimes sound like scraping, once again showing Björk's willingness to integrate sounds that might not be conventionally beautiful into her work without diluting them. <br/><br/>Perhaps the most striking thing about Drawing Restraint 9 is how seamlessly it blends and contrasts beauty and violence. "Ambergris March" is all sparkling, dreamy delight, while "Hunter Vessel" mixes tense, stabbing brass with reflective passages. The handful of tracks Björk sings on embody this duality as well: the layers of her vocals on "Bath" are appropriately soothing, but on "Storm," they add to the track's chaotic power. Though Drawing Restraint 9 is more expansive and abstract than Medúlla, it's in a similarly challenging and rewarding vein, and bodes well for future Björk/Barney collaborations.