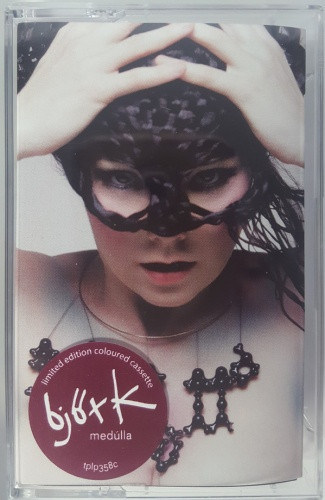 It's hard to accuse Björk of making music influenced by commercial or critical expectations at any point in her career, but her post-Homogenic work is even more focused on following her bliss, whether that means acting and singing in Lars Von Trier's grim musical Dancer in the Dark; crafting tiptoeing laptop lullabies on Vespertine; or, in the case of Medúlla, sculpting an album out of almost nothing but singing and vocal samples. The album's title and concept refer to the purest essence of something, and Medúlla explores both the ritual power of the human voice and some of the most essential themes of Björk's music in a way that's both primal and elaborate. It took a large cast of characters to make the album's seemingly organic sound, including vocalists ranging from Icelandic and British choirs to Inuit singers to Mike Patton and Robert Wyatt; programmers like Matmos, Mark Bell, and Mark "Spike" Stent; and beatboxers such as Rahzel and the onomatopoeically named Japanese artist Dokaka. Several songs are sung in Icelandic, which works especially well, not only because it ties in with Medúlla's concept, but also because of the language's sonic qualities: the rolling Rs, guttural stops, and elongated vowels reflect the alternately chopped and soaring arrangements behind them. Neopaganism and unfettered sensuality also wind through the album, particularly on "Mouth's Cradle," along with meditative, Vespertine-like pieces such as "Desired Constellation." Medúlla is unusually intimate: Björk's voice is miked very closely, and with the dense layers of vocals surrounding her, it often sounds as if you're listening to the album from inside her larynx. Some of the heavy breathing, grunts, and ululating woven into the album come close to provoking physical reactions: the eerie sighs and throat singing on the feral "Ancestors" make the chest ache and suggest a particularly melodic pack of wolves. Meanwhile, there's something simian about Dokaka's gleeful babbling and beats on "Triumph of a Heart." Despite its gentler moments, Medúlla's raw rhythms and rarefied choral washes make it the most challenging work of Björk's career. "Where Is the Line" is one of her tough, no-nonsense songs, and Rahzel's hard-hitting beats make it starker than anything on Homogenic. Even relatively accessible songs, like the gone-native loveliness of "Who Is It (Carry My Joy on the Left, Carry My Pain on the Right)" and "Oceania," which Björk wrote for the 2004 Athens Olympics, have an alien quality that is all the stranger considering that nearly all of their source material is human (except for the odd keyboard or two). Actually, fans of world, contemporary classical, or avant-garde music might find more to appreciate in Medúlla than anyone looking for a "Human Behaviour" or "It's Oh So Quiet." It's not an immediate album, but it is a fascinating one, especially for anyone interested in the world's oldest instrument being used in unexpected ways.