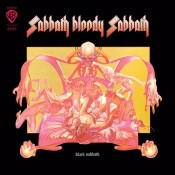 2016 reissue on 180g red/orange vinyl!! With 1973's Sabbath Bloody Sabbath, heavy metal godfathers Black Sabbath made a concerted effort to prove their remaining critics wrong by raising their creative stakes and dispensing unprecedented attention to the album's production standards, arrangements, and even the cover artwork. As a result, bold new efforts like the timeless title track, "A National Acrobat," and "Killing Yourself to Live" positively glistened with a newfound level of finesse and maturity, while remaining largely faithful, aesthetically speaking, to the band's signature compositional style. In fact, their sheer songwriting excellence may even have helped to ease the transition for suspicious older fans left yearning for the rough-hewn, brute strength that had made recent triumphs like Master of Reality and Vol. 4 (really, all their previous albums) such undeniable forces of nature. But thanks to Sabbath Bloody Sabbath's nearly flawless execution, even a more adventurous experiment like the string-laden "Spiral Architect," with its tasteful background orchestration, managed to sound surprisingly natural, and in the dreamy instrumental "Fluff," Tony Iommi scored his first truly memorable solo piece. If anything, only the group's at times heavy-handed adoption of synthesizers met with inconsistent consequences, with erstwhile Yes keyboard wizard Rick Wakeman bringing only good things to the memorable "Sabbra Cadabra" (who know he was such a great boogie-woogie pianist?), while the robotically dull "Who Are You" definitely suffered from synthesizer novelty overkill. All things considered, though, Sabbath Bloody Sabbath was arguably Black Sabbath's fifth masterpiece in four years, and remains an essential item in any heavy metal collection.