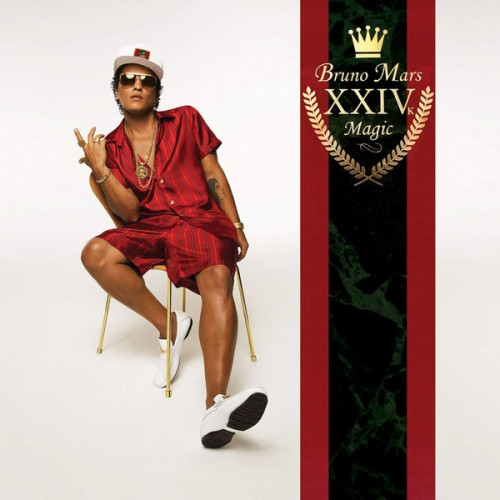 Released four years after the multi-platinum Unorthodox Jukebox, 24K Magic -- or XXIVK Magic, if you're foolish enough to go by the cover -- might as well be considered the full-length sequel to "Uptown Funk," Bruno Mars' 2014 hit collaboration with Mark Ronson. On his third album, Mars, joined primarily by old comrades Philip Lawrence, Brody Brown, and James Fauntleroy, sheds the reggae and new wave inspirations and goes all-out R&B. This is less an affected retro-soul pastiche -- like, say, The Return of Bruno -- than it is an amusing '80s-centric tribute to black radio.

Sonically, '80s here means the gamut and the aftershocks felt the following decade, from the sparking midtempo groove in "Chunky," which recalls Shalamar even more than album two's "Treasure," to some full-blooded new jack swing moves. The clock is turned back a couple more decades to passable strutting James Brown-isms in "Perm," while "Too Good to Say Goodbye," co-written by Babyface, draws its structure and certain components from early-'70s Philly soul. Almost all of the material involves Mars in winking bad-boy player mode. He's often just ampin' like Bobby, yet the performances are undeniable, dealt out with all the determination and attitude of a kid who just bought a custom lavender Razz with his paper route money. Lead single "24K Magic" is a scrupulous compound of early-'80s funk tricks, another needed injection of good-time energy into commercial airwaves, but the album's true triumph is buried near the end -- not that it takes long to get there -- and scrapes the dawn of the '90s. In living color, decked out with a rattling breakbeat and zipping bassline, "Finesse" revisits the era when producers like Teddy Riley, Dave "Jam" Hall, and Dr. Freeze pushed their genre forward by fusing hip-hop to what they learned from electronic post-disco R&B pioneered by Leon Sylvers III, Kashif, and Jimmy Jam and Terry Lewis. Like much of what precedes it, the song is a blast.