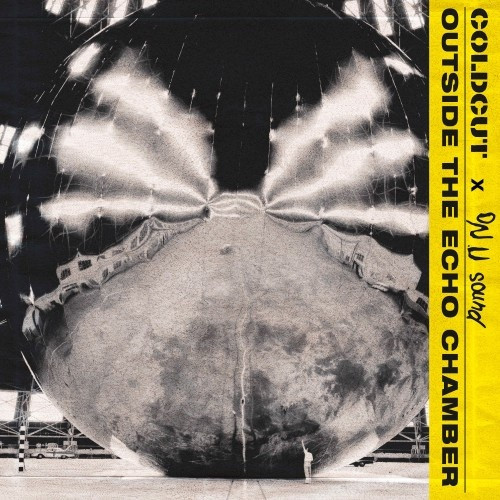 Ahead Of Our Time

It’s tempting to ask why no one thought of it sooner. Coldcut (Matt Black & Jon More) and Adrian Sherwood – kingpin of the legendary On-U Sound label – are the perfect sonic match; two pioneers of British music united by a maverick spirit. These artists have a deeper intertwined history- On-U Sound is printed in Coldcut’s genes in the music they grew up with. This is something much more special than the average collaboration, and it shows in the result: Coldcut x On-U Sound’s ‘Outside the Echo Chamber’ via Ahead Of Our Time (Coldcut’s first label) – a thrilling sonic adventure, and an album of freshly-minted, electronic dub-pop.

Although Coldcut and Sherwood could have come together at any point in their long, fruitful histories to make a record together, there’d have been no better time to do so than now, in 2017. Uniting an array of global musicians and vocalists including Roots Manuva, Junior Reid, Lee ‘Scratch’ Perry and Ce’Cile – to name but a few – and made in London, Ramsgate, Jamaica, and Los Angeles – where co-producer and fellow dance heavyweight Dave Taylor (Switch & With You.) is now based – ‘Outside the Echo Chamber’ is a timely rallying call for Britain’s musical melting pot.

At the beating heart of this album are some of the most talented players in music’s recent history – long time On-U Sound collaborators Skip McDonald on guitar and bassist Doug Wimbish. These two formed part of the house band for the pioneering rap label Sugar Hill, providing the music for some of the most seminal records of the era like Grandmaster Flash's ‘The Message', and many others.

The trajectories of Coldcut and Adrian Sherwood take in some key moments in U.K. music. Coldcut’s origins are in the fertile hotbed of late ‘80s London, and the pre-commercial dance music that evolved from it. They were ‘the first Brit artists to really get hip-hop’s class-cutup aesthetic,’ introducing rap to ravers, creating a heady blend of hip-hop production aesthetics and proto-acid house grooves, and becoming a precursor for scenes as diverse as electronica, breakbeat and ambient. Their early 12”s, ‘Say Kids, What Time is It?’ and ‘Beats and Pieces’ changed the face of emergent dance.

A notorious remix of ‘Eric B and Rakim’s ‘Paid in Full’ took their radical sound mainstream, and they introduced Yazz and Lisa Stansfield to the world in a wave of chart success. Their mid 90s 'Journeys by DJ' is regarded by many as the top DJ mix of all time. When their left foot approach found itself at odds with the conservatism of the major label system, they founded the iconic indie label Ninja Tune, which will be 27 years old in 2017, Coldcut themselves celebrate 30 years since their first release in 2017.

For 40 years now, forward-thinking sound scientist and mixologist Adrian Sherwood has been blowing minds and speakers alike. Producer, remixer, and undisputed patriarch of the British dub collective/record label On-U Sound, Sherwood has long been regarded as one of the most innovative and influential artists in contemporary dance and modern reggae music. First surfacing during the mid ’70s, he formed On-U Sound in 1981. His talent for creating musical space, suspense, sensations and textures have enabled him to pioneer a distinctive fusion of dub, rock, reggae and dance that challenges tradition not only in roots circles, but also in the pop world at large. He’s worked with a dizzying array of legendary artists, including Depeche Mode, Primal Scream, Roots Manuva, Peaking Lights, Einsturzende Neubaten, Ministry, Skinny Puppy and Nine Inch Nails. It could be argued that along with Mad Professor and Dennis Bovell (who produced Black’s earliest work), Sherwood was the key dub musician around. Three decades of relentless work has seen him release three solo albums – the latest in 2012 – and begin an ongoing collaboration with electronic don Pinch.

More important than the individual histories, though, is the one that these two artists share. Long before Coldcut even existed, Jon More and Matt Black were buying On-U Sound releases. “The On-U Sound records were a unique and powerful influence on us,” Black says. More remembers that “the first On-U Sound record I picked up was Prince Far I. I bought it in High Wycombe when I lived there, at Art College in 1979.” Black summarises the influence the collective had on he and More as young men: “Me and my mates used to collect the records, the design of On-U Sound 10 inch black and white sleeves were so cool. Without On-U there would be no Ninja Tune.” “Jon and I both went to High Wycombe technical college,” Sherwood says. “There was a blues club The Shabeen, Jon and I saw Prince Far I there.” The globally-minded, reggae sound of ‘Outside the Echo Chamber’ has its origins in this period. Sherwood adds, “My school had Pakistani, Indian, Polish, Irish, Italian people. At the time we all liked pop music, soul and the reggae was coming in. Early on I liked the rude ones, Prince Buster, Lee Perry, then the gimmicky ones, then the DJ ones. And then I got into the songs.”

More and Black loved reggae from an early age too. “In Thame where I was born, 13 miles from High Wycombe, they had a country fair,” More says, “and that’s where I first heard reggae.” Black had a similar experience: “Mine was Banbury fair,” he says. “They used to have great loud soundsystems!” These early influences found their way into Coldcut’s own music. “The whole Coldcut mash up thing was partly inspired by On-U,” Black says. “When we made a Go-Go style record ‘Stop That Crazy Thing’ for our first album and put reggae vocalist Junior Reed (who features on ‘Outside the Echo Chamber’) on there, that was the On-U influence. Adrian made connections, he also did a remix of it.” And Coldcut’s pioneering hip-hop made sense to Sherwood too. “I ended up going to NY and staying with Tommy (Silverman, of Tommy Boy) in 1984. I was squatting with Neneh Cherry and Junior Williams at the time. Duke Bootee (The Message), Melle Mel, Krs-1 were all around. NY was really bubbling.”

Hip-hop, like reggae, is at the heart of ‘Outside the Echo Chamber.’ In fact, the Coldcut and On-U vectors meet at the UK’s finest practitioner of the genre, frequent Coldcut collaborator and Ninja stable-mate, Roots Manuva. “He’s one of the leading British poets,” Black says. “His lyrical take is unique, he has that bittersweet thing going on. He’s honest about the nature of existence.” “I was lucky to work on Roots’ last album ‘Bleeds’,” Sherwood adds. “I knew I was working with a great artist.” This is a properly diverse album. Rodney opens up ‘Outside the Echo Chamber’ with the brilliant ‘Vitals,’ a song that sets out the album’s sonic stall and lays its rebel heart bare. Deep bass, an elephantine groove and reflective coruscating bars. ‘Make Up Your Mind’ feat. Ce’cile is a yearning, rainy day love song, whilst Lee ‘Scratch’ Perry, Junior Reid and Elan breathe political fire and sonic glee into an exemplary dub in ‘Divide and Rule.’ Elan’s reappearance on ‘Make Up Your Mind’ is a fathoms-deep piece of reggae soul that sticks in the mind, Toddla T provided production assistance on this and also ‘Everyday Another Sanction’. ‘Kajra’ is a masterly rework of an old Hindi-Urdu love song “Kajra Mohabbat Wala”. Dub is a core aesthetic and all tracks have more extreme dub versions that will also surface.

There are sixty years of shared musical experience, culture and knowledge between Coldcut and On-U Sound, every bit of which has been poured into making ‘Outside the Echo Chamber.’ In the bleak political landscape of early 2017, this album’s warmth, and its outward-looking, globally-minded sound couldn’t feel more welcome. It's the fruit of lifetimes work that has been worth the wait.