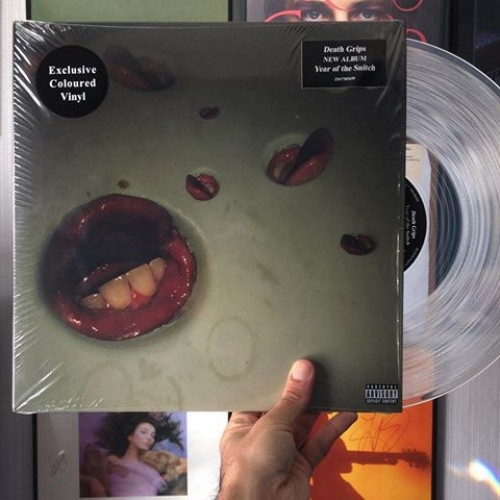 Indie Exclusive Clear Vinyl, comes with printed inner sleeve - In the process of trying to sabotage their career at every turn, Death Grips became career artists. Regardless of how you classify their prolific output thus far, the noise-rap art project has averaged one album per year, with enough variation and quality control to make their “will they or won’t they break up” shtick background noise. They’re industrious, downright reliable, even. So on their 10th release in seven years, Year of the Snitch, Death Grips stay politically agnostic, persistently agitated—in a word, noided. It’s kinda quaint. Maybe even comforting.

Year of the Snitch makes it easier to see how their essence may have leached into today’s serrated musical landscape. The convergence of nu-metal and SoundCloud rap might’ve happened anyway—same with the bonkers, jump-cutting metalcore of bands like Code Orange and Vein—but it’s possible to hear their groundbreaking 2012 album The Money Store as a soft launch for what was to come—a context to understand the kind of heavy music either associated with high-intensity CrossFit or Mountain Dew-fueled eSports.

Even still, Death Grips’ sonic signature is so completely their own that it can’t be evoked with anything short of parody. It proves to be very adaptable to an increasingly diffuse number of sounds on Year of the Snitch. Mid-’90s drum ‘n’ bass beats with shoegaze guitars? “Death Grips is Online” will certainly try to create a “Dreamcast Teenage Riot.” “What if Death Grips went rockabilly?” is a question nobody was probably asking, but god bless “Disappointed” for giving us the answer. Is “Streaky” MC Ride’s stab at trap-rap or a strip club anthem? It’s hard to tell from its actual lyrics, but when the album threatens total abstraction, that’s where a drummer as expressive and destructive as Zach Hill grounds the sound into something resembling a band playing a song.