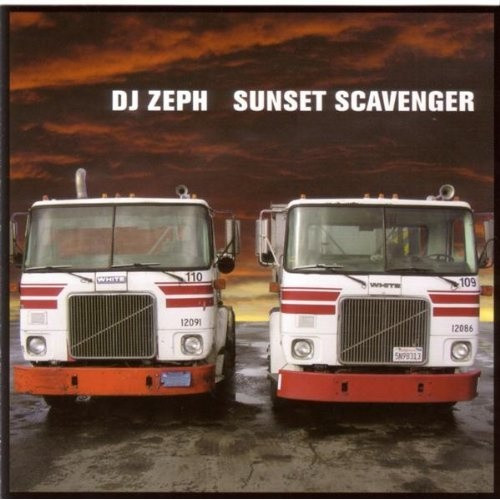 After ten years behind the decks, a 2001 debut LP, and last year's well-received "Floorwax" 12-inch, San Francisco beat scientist DJ Zeph's sophomore release fights for the royal echelon of turntablism. He must realize he's on the cusp of reaching a wider audience: Sunset Scavenger pulls out all stops. Forgoing previous experimentation for superior songcraft, the album is innovative and fresh, driven equally by Zeph's warm, deft sampling technique, his ear for tight composition, and the organic vibe brought by an array of prestigious guest artists.

Sunset Scavenger, named for the perpetually busy Bay Area recycling and composting service, couldn't ask for a more apt title: It sifts through heaps of styles and moods, cleverly referencing classic themes while constructing an absorbing, purely original work from the bits and pieces. From the live electro tabla breaks of "Go Back", to Zeph's pairing with DJ Quest on the Bukem-esque opener "Unsubtractable", to Rahsaan Ahmed's Kurtis Blow flow on the rollerdisco bounce of "Floorwax", this record spans the entire breakbeat landscape to stunning effect, using history as it building blocks and wrapping its MCs in a warm blanket of crackling vinyl and analog purr.

When huge, unmistakable personalities show up-- like The Coup's Boots Riley and a typically raucous Lyrics Born-- Zeph's seamless production one-ups that of his contemporaries by complimenting, rather than obstructing, his guests. In fact, the music's luxurious, necksnapping immediacy itself takes on a personality of its own: That's live violin and cello on "Underscore", beautifully amplified to swelling, orchestral proportions. The percussive "Organ Eyes" pours syncopated Hammond atop live tabla and former Tower of Power drummer Ron Beck's ride and snare cracks; "Sunset Samba" braids live flute, trumpet, and a sizzling Brazilian rhythm.

These collaborations have Zeph exhibiting the malleability of an expert arranger and producer-- through his wholly sample-constructed pieces, he flexes all the vinyl jockey flash that's rocketed his live shows to must-see status. The soul vocals on "Raw B Interlude" are cratedigging gold, resting against conga beats and jangly guitar that suggest Latin-flavored Bootsy bass. "Cormorant", meanwhile, captures Zeph at his most downtempo, his low-key beat and intermittent guitar samples trickling beneath hip-hop poet Tim Barsky's urban spoken word fairy tale.