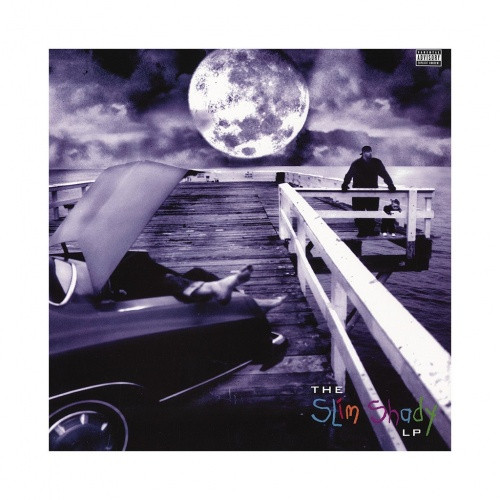 2014 repress - Given his subsequent superstardom, culminating in no less than an Academy Award, it may be easy to overlook exactly how demonized Eminem was once his mainstream debut album, The Slim Shady LP, grabbed the attention of pop music upon its release in 1999. Then, it wasn't clear to every listener that Eminem was, as they say, an unreliable narrator, somebody who slung satire, lies, uncomfortable truths, and lacerating insights with vigor and venom, blurring the line between reality and parody, all seemingly without effort. The Slim Shady LP bristles with this tension, since it's never always clear when Marshall Mathers is joking and when he's dead serious.

This was unsettling in 1999, when nobody knew his back-story, and years later, when his personal turmoil is public knowledge, it still can be unsettling, because his words and delivery are that powerful. Of course, nowhere is this more true than on "97 Bonnie and Clyde," a notorious track where he imagines killing his wife and then disposing of the body with his baby daughter in tow. There have been more violent songs in rap, but few more disturbing, and it's not because of what it describes, it's how he describes it -- how the perfectly modulated phrasing enhances the horror and black humor of his words.

Eminem's supreme gifts are an expansive vocabulary and vivid imagination, which he unleashes with wicked humor and unsparing anger in equal measure. The production -- masterminded by Dr. Dre but also helmed in large doses by Marky and Jeff Bass, along with Marshall himself -- mirrors his rhymes, with their spare, intricately layered arrangements enhancing his narratives, which are always at the forefront. As well they should be -- there are few rappers as wildly gifted verbally as Eminem. At a time when many rappers were stuck in the stultifying swamp of gangsta clichés, Eminem broke through the hardcore murk by abandoning the genre's familiar themes and flaunting a style with more verbal muscle and imagination than any of his contemporaries. Years later, as the shock has faded, it's those lyrical skills and the subtle mastery of the music that still resonate, and they're what make The Slim Shady LP one of the great debuts in both hip-hop and modern pop music. 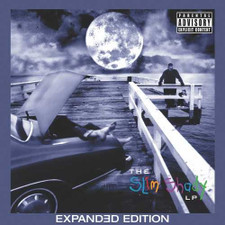