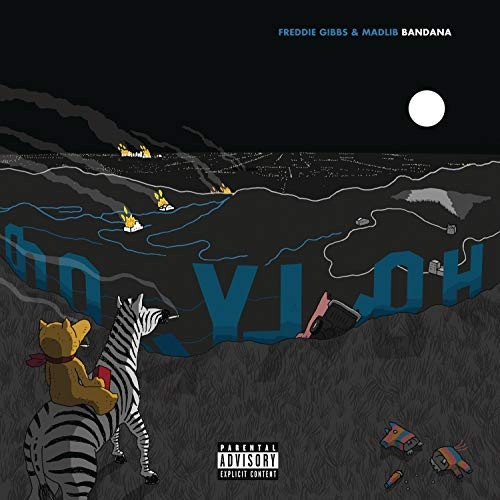 On paper, Freddie Gibbs, a straight-shooting street rapper, and Madlib, an eccentric tinkerer, are as mouth-watering a combo as licorice and pickle juice. But their collaborative 2014 album Piñata succeeded because the two are equally uncompromising: Madlib tailors beats to his eclectic ears alone, while Gibbs insists that he can rap over anything. Kindred spirits, the pair bonded through mutual gumption.

On follow-up Bandana, the bond deepens. Madlib’s beats remain off-kilter, and Gibbs remains gangster, but there’s a looser feel to this record, a spirit of intuition and intimacy. Their overall recording process didn’t change much: Madlib sent beats and Gibbs rapped over them as is—samples, pauses, breaks, and all. This time, though, they made the effort to meet in the studio and review different mixes and edits, to calibrate. The result is a keener sense of each other’s presence. Moving in lockstep, Gibbs and Madlib pull themselves deeper into one another’s worlds, forging a new one in the process.

On Piñata, the duo bridged Gibbs’ street sense and Madlib’s throwback flair by embracing the sounds and attitudes of blaxploitation. Smoky soul drifted out of every crevice, drugs flooded the streets, and middle fingers never came down. The general vibe was defiant, gritty, and nostalgic, fitting the back-to-basics spirit of a proud lyricist linking with an inveterate crate-digger. Bandana is palpably more unhinged, less rooted in a particular time or style or mood.

The through line is black freedom. Across the record Gibbs mentions various black figures and tragedies, from the transatlantic slave trade (“Flat Tummy Tea”) to Baltimore drug kingpin Melvin Williams (“Education”) to basketball star Allen Iverson (“Practice”) to the death by police bombing of mass shooter Micah Johnson (“Soul Right”) to Tupac’s assault on the Hughes Brothers (“Massage Seats”), weaving a grand, ambiguous tapestry. Gibbs has been talking black power in various forms since his early mixtapes, but here he’s less certain about what it looks like, who embodies it, how to secure it. As he takes a fuller view of his life and the fates of his idols, he grows more cautious. “I can’t move the same/I gotta readjust how I maneuver,” he insists on “Gat Damn.”

He’s kept on his toes by Madlib’s strikingly robust production, which is maximal compared to his revered lo-fi sound. “Half Manne Half Cocaine” begins with ticking hi-hats and bass kicks topped by twinkly bells, then spazzes into a torrent of cymbals and sampled shouts—trap by way of EPMD. The scuzzy riff on “Flat Tummy Tea” is stretched, distorted, and splashed with atonal effects that evaporate into a breakbeat. Madlib has always been an unsparing producer, but this is one of the few times he’s allowed himself to be baroque.

Gibbs’ rapping is just as fitful. Jerky yet nimble, he regularly drops in and out of cadence, throttling and braking his flows to accent key images. On “Situations,” he mentions surviving a shooting that claimed his cousin, sprinting through the memory like he’s felt a sudden jolt of pain. “Cousin took two to the brain/Bullets missed me it’s a blessing/I could see the day like it was yesterday I’ll never forget it,” he says, cramming the last line into one bar. On “Gat Damn,” he recalls fasting in an Austrian prison that didn’t provide Muslim-friendly meals. “Say my prayers, Alhamduillah/No bacon, ham, bacon, ham/And cold salami/That’s all they serving,” he sings, evoking the strain of the experience by spacing out his words. Gibbs boasts often of his versatility, but here his movement is dictated by purpose rather than reflex.

A current of self-discovery bubbles beneath all this motion. Madlib emerges as less subdued, more emboldened to challenge his collaborator (and the listener) rather than shroud his ideas in fog. His catalog is full of gems, but not since Georgia Anne Muldrow’s Seeds, and Madvillainy before that, has the Beat Konducta felt like, well, a conductor, actively dictating the path the music takes. You can feel Gibbs’ ideas being guided by the dreamy loops on “Crime Pays” and the humid sway of “Cataracts.” 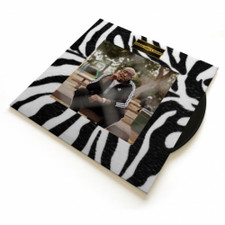 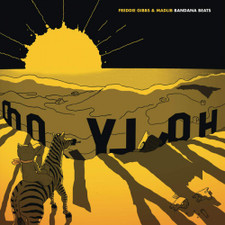