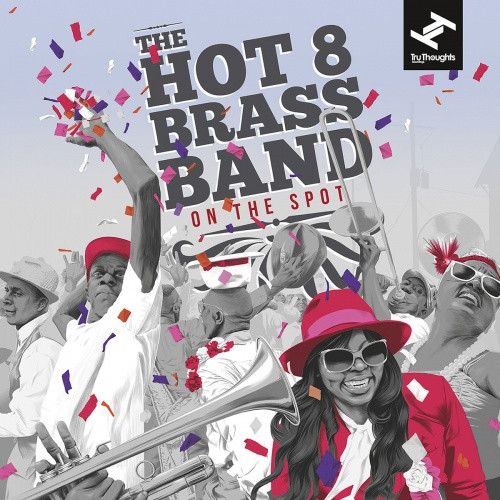 The title of the new album refers to the glorious, rare moment in a New Orleans parade when the band stops to take a break but keeps noodling with their instruments for the crowd. Vibing, keeping the energy up, when they’re completely in the moment they sync up and the magic happens – a new tune is created: On The Spot. Buzzing with the spontaneous synchronicity which has fuelled their development from the streets of their hometown to the forefront of the global scene over two decades, their fifth LP sees Hot 8 committing this live sound and spirit to record like never before – note the exclamation captured on tape at end of the title track: “Did we just make that up?!”

‘On The Spot’ also points to the way Hot 8 have had to adapt, learn and live from moment to moment throughout their career, and their lives. A barely imaginable series of trials - the devastation of Hurricane Katrina, the separate deaths of five band members, and trumpeter Terrell “Burger” Batiste losing his legs in a car crash - have tested these men time and again. Their tragic yet life-affirming story has been featured in the Spike Lee documentaries When The Levees Broke and The Creek Don’t Rise, and David Simon’s HBO series Treme; recent interviews with Mary Anne Hobbs (6Music) and BBC World Service’s Outlook chimed especially intensely with listeners in the midst of the Black Lives Matter movement.

In true Hot 8 style, this album pairs hard-hitting, heart-on-sleeve sentiment with party-fuelling beats, hooks and grooves; raw funk and charismatic hip hop vocals mix with Big Easy jazz elegance. These 11tracks have helped the band get through their up and down moments; ‘On The Spot’ honours fallen friends and the city of New Orleans, and showcases new heights achieved after coming back from the deepest lows. “We still break down a lot,” says bandleader and tuba player Bennie Pete, “but now it’s tears of joy. We keep everything in our hearts, but we keep on.”