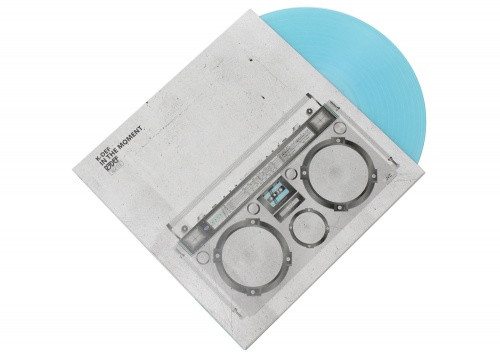 Limited to 250 - If there’s anyone who lives up to the concept of “Supply and Demand,” its veteran producer, K-Def. With 4 full length projects and an EP with rapper K.A.A.N. all released in 2016, he’s back with his first offering for 2017; In The Moment. So much has been and can be said about K over 2 plus decades in the industry as one of hip-hop’s elite producers. What else is left? Well, honestly K is not stuck on the accolades of his past and he prefers to look at his art as “his best work is yet to come”, even after so many monumental career accomplishments.

Recently, he was featured in Mass Appeal’s viral web series, Rhythm Roulette, to great appreciation from longtime fans and newfound acclaim reaching a younger audience previously unaware of his brand. Capitalizing on buzz, K realizes that mass abundance is never a bad thing as long as your product is good. So he continuously assembles project after project, adding new chapters to his legacy.

A man of many tricks who guards his secrets, peers and record nerds are often dumbfounded by many of the techniques K-Def exhibits in his well constructed tracks. Never one to shun new technology, many of his latest works show what can be done with sound when software and a complex mind meet. However, as advanced as K-Def evolves, he’s never abandoned his fundamental approaches to beat production no matter what tools he applies. He’d rather make room for both. With the invention of Akai’s MPC Renaissance, as advertised, it put K in a tactile headspace of hardware before the software it controls. Why stop there when K had bags of diskettes he accumulated from his work on the classic MPC 60ii and the MPC 3000?

The nostalgic process inspired K to incorporate all this weapons to make timeless current day music regardless of perceived limitations. Creatives often refer to their optimal stride in coined terms like ”The magic hour” or ”In the zone”. Using all the tools and experience at his disposal (mainly MPC’s), K captured his stride documented in these generous 23 tracks. When asked about the album’s background and composition, he said simply, (he) “was in the moment”. It resonated and there you have it. K-Def’s new LP is titled “In the Moment” so you’re “in luck” if you’re “in the know.”