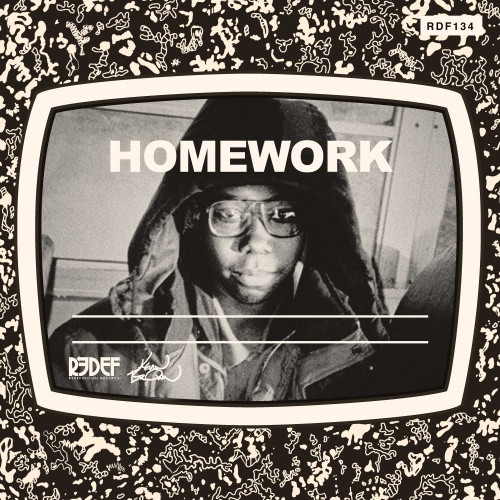 The DMV’s own, Kev Brown has announced his first solo rap album since 2005. Hailing from Palmer Park in Landover, Maryland specifically, after a 13 year hiatus, the producer/MC has finally prepared the sophomore sequel to 2005’s influential cult classic, I Do What I Do. Entitled, Homework, Brown and Redefinition Recs have partnered to release an LP the game has been missing for too long.

Now 13 years is a long wait, but don’t think Kev has been idle in obscurity. He has been involved with several collaborative projects, garnered tons of production credits and released over a half dozen beat tapes during that time frame. It is also important to note that he was in no rush to drop another rap album and preferred to compose Homework organically and at his own pace, in the comforts of his own home; hence the title. Though Brown is known as one of hip-hop’s elite producers from heavyweights like Diamond D, Pete Rock, Busta Rhymes, Peter Rosenberg, 9th Wonder and Jazzy Jeff, he is a man of many hats.

Kev Brown’s debut album was groundbreaking in so many areas that the recording itself and Kev is cemented as legendary. It would be no surprise that hip-hop would ask for the next installment and he’s nowhere near done leaving his mark. Homework is a seamless nonstop exhibition of KB’s range. Kev raps confidently and wisely throughout the album’s 27 tracks. Lyrically it’s personal, introspective, comedic, observatory and witty delivered in Kev’s smooth baritone style. Vocals are equally complimented by instrumentals all produced by the man himself and fluidly morph into instrumental compositions too good to be considered interludes. The album was composed using several different samplers and recording technologies, but the vibe is never compromised. Homework is the perfect game plan for today’s climate and for those who haven’t, do your homework on this man. You won’t be disappointed.