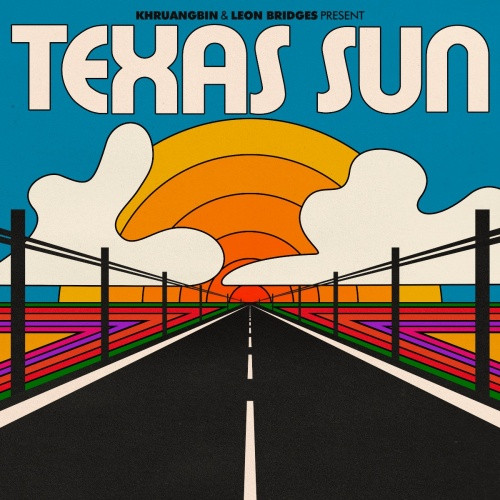 It’s hard to fully grasp how big Texas is until you’ve driven through a significant stretch of road south of the panhandle. My wife and I made a daylong drive from New Orleans to Austin a few years ago, and the horizon only continued to unfold and unfold—a seemingly endless stretch of land, much of it unspoiled by development, stretching ahead of us. You start to get a sense of how complicated it is to boil all of it down to simplified characteristics—how much more there is to Texas than cowboys, the Cowboys, and George W. Bush. It’s easy to get lost in thought on the Texas highway, if for no other reason than there’s just so much of it. All the more reason to have something good to listen to along the way. This is essentially the motivation that led to the creation of Texas Sun, the EP-length debut collaboration between Fort Worth’s Leon Bridges and Houston’s Khruangbin. The two artists shared the stage on tour in 2018, which they translated into a brief but inspired studio effort, which Khruangbin bassist Laura Lee describes as feeling “like a cross-country Texas drive to me.” It’s a fitting encapsulation of the four songs here—all wide open plains, sun-baked landscapes and pinkish-purple sunsets. It could easily be a road trip through any state in the West—Arizona, New Mexico, Utah, California—but sentimentally unique to the home state of Bridges and Khruangbin. And from the gentle, easy strums of the opening title track, a sense of warmth and comfort instantly sets in. Bridges’ invitation to “come on and roll with me ’til the sun goes down” sets the tone for a soul-nourishing road trip set against a backdrop of gorgeous pedal steel and gentle psychedelia. It’s a feelgood balm in an era of constant frustration, a break from extremely-online despair that extols the virtues of getting in a car with someone you love and simply letting what’s beyond the horizon be your destination. The other three songs on Texas Sun follow the tone of the title track if not necessarily the sound. Khruangbin back up Bridges’ velvety croon with as many different approaches as there are tracks, leaping from laid-back, synth-laden psychedelia on “Midnight” to playfully oddball dub-funk on “C-Side” to a marvelously heady and stoned slow jam on closer “Conversion.” Each song is engineered for close listening or simply daydream drifting, offering layers to unravel or a lush atmosphere to draw you out of yourself. Either option is perfectly valid, though the former is perhaps more satisfying on a sensory level. But the end result is the same: Texas Sun is a marvelous escape.