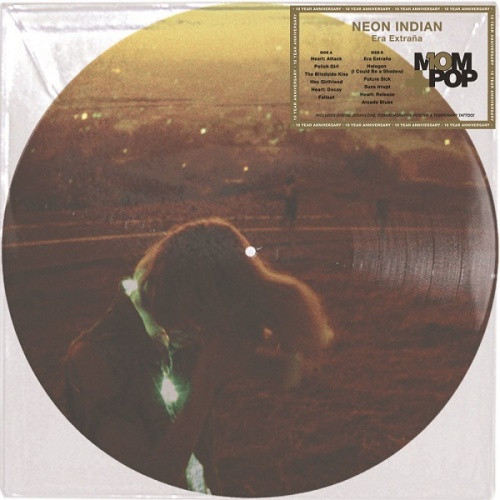 Picture Disc celebrating Mom + Pop's 10 Yr Anniversary. Many of chillwave’s pioneers grew up from -- or out of -- that sound on their second albums, and Neon Indian's Alan Palomo was no exception. Part of chillwave’s initial appeal was that it sounded like it was recorded in bedrooms during stolen moments, but Era Extraña is far more focused than Palomo’s breakthrough debut Psychic Chasms was. It’s even somewhat ambitious, a far cry from the sweet slackerisms like “Deadbeat Summer” that put him on the map. Palomo worked with producer Dave Fridmann on these songs, and Fridmann’s polish and layering finesse transform Neon Indian's hazy electro-pop into something more akin to M83's luxurious nostalgia than Palomo's roots.

After the brief prelude “Heart Attack,” Era Extraña truly begins with its biggest departure: “Polish Girl”’s chilly 8-bit synths and driving beats sound closer to Palomo's work as Vega than as Neon Indian, but his pop skills are unmistakable. While the album is more professional-sounding, it keeps a lot of Psychic Chasms' endearing wooziness. The wispy “Heart” interludes that bracket Era Extraña are probably the closest link to Palomo's debut, along with the playfully poignant “Future Sick.” Things get more circuit-bent as Era Extraña progresses, particularly on “Hex Girlfriend”’s electro-shoegaze, but Palomo's biggest accomplishment is keeping the human heart beating inside his songs’ shiny casings. He does this most gorgeously on “The Blindside Kiss,” where his wish to make a perfect moment last “one… more… night” is surrounded by synths sparkling and streaming like falling stars. Even so, his viewpoint here is slightly different than on Psychic Chasms. He sounds less naïve, even though he previously lamented doing drugs with the wrong people, and here he’s all about love, or the lack of it. However, Era Extraña's teenage yearning still feels distinctly ‘80s: “Fallout”’s slow-motion strut could have been by Love and Rockets or even Billy Idol back in the day, while “Halogen (I Could Be a Shadow)” sounds like it should play over the credits of a sci-fi teen sex comedy. The droning epic “Suns Irrupt” underscores the huge steps Palomo has made since the Psychic Chasms days, and while that album’s homespun charm is missed a little, Era Extraña's lavish electro-pop proves that Neon Indian can be more than just chillwave.