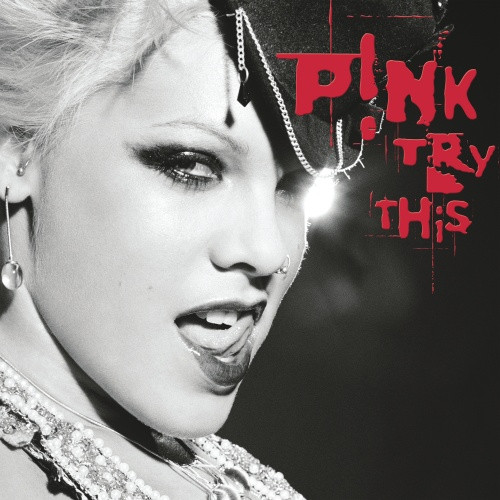 2017 reissue on red vinyl - Of all the dance-pop/teen pop singers to emerge in 1999, Pink seemed the least likely to have success. She didn't have an easy-to-market image like Britney or Christina, nor were her singles all that distinctive, so it was a real shock when she reinvented herself as a badass dance-rock chick for her second album, M!ssundaztood. It wasn't just that the album revealed a unique, forceful personality; it was that it crafted an original, dynamic sound from seemingly contradictory sources, as Pink hauled out forgotten 4 Non Blondes leader Linda Perry for her primary collaborator, piled on the hard rock riffs, and sharpened up the R&B rhythms, while writing as nakedly as a confessional singer/songwriter.

It was a big surprise that Pink had an album like M!ssundaztood in her, but that surprise is nearly equalled by its successor, Try This, which proves that she can pull off the same trick twice -- an unpredictable giant leap forward, assisted by unlikely collaborators, that winds up being among the best pop music of its given year. While Perry is still around, she only collaborates on three tracks, since Pink has picked another left-field choice for her main co-writer/producer for Try This: Tim Armstrong, one of the lead singer/songwriters for the acclaimed neo-punk band Rancid. Armstrong co-writes and produces eight of the 13 songs here, and while it's true that he helps steer Pink into harder-rocking territory, the end result isn't quite as simple as Try This being a straight-up rock & roll album.

Instead, hard rock is used as the foundation for the record (even some of the Perry-written tracks rock very hard), and then it stretches out into several different styles and sounds. Some are familiar -- there's a handful of dance-oriented tracks, a quiet ballad, such as the closer, "Love Song" -- but, like M!ssundaztood, this is pop music that knows no boundaries, borrowing ideas from punk, soul, ska, new wave, and electronica to create an exhilarating listen that crackles with energy and inventiveness. This music has reference points, some intentional and some not -- the similarities of "Trouble" and Nirvana's cover of the Vaselines' "Molly's Lips" may be on purpose, but the echoes of Blur's "Pressure on Julian" on "God Is a DJ" is surely coincidental -- but it's presentation is original and exceptionally well-written. This time around, she's not as consciously confessional, which makes for a nice fit for Armstrong's strong sense of songcraft and pop hooks, resulting in music that is immediately grabbing yet so sturdily crafted it only seems stronger, even catchier, with repeated listens.

While Pink's peers take incremental, cautious artistic steps forward, she's slyly fearless, choosing the right collaborators that help her create pop music that has both style and substance to spare. Britney Spears, Pink's avowed arch-nemesis, may claim that she's taking advice from Madonna, but here Pink illustrates that she's the true heir to Madonna's throne, since she displays a restlessness similar to the Material Girl in the '80s, while never once sounding like Madonna -- or other spiritual predecessors like Pat Benatar, Stevie Nicks, or Debbie Harry, for that matter. With Try This, Pink has firmly established a voice of her own, and in doing so, she's made another tremendous modern pop record.