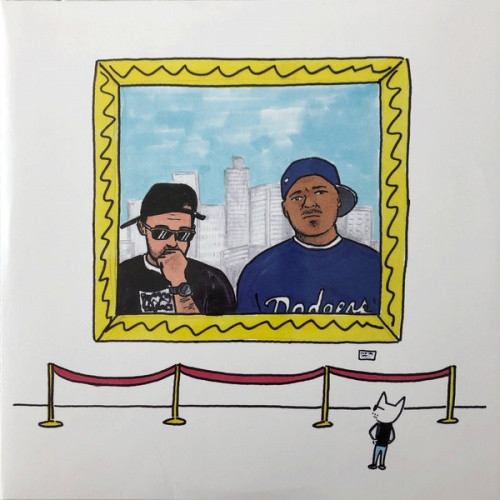 People Under The Stairs - Sincerely, The P - 2x LP Vinyl

It is rare when an artist or group ends their career on their own terms. Most don’t just decide that an album will be their last; it simply ends up that way by default. The hip-hop group People Under The Stairs (PUTS) are one of the few groups that have announced its own curtain call, drawing their more-than-two-decades career to a close with their twelfth and final project, Sincerely, The P.

PUTS are ostensibly calling it quits as a group because Chris “Thes One” Portugal is retiring. He has shared rapping and production duties with Michael “Double K” Turner during the last 20+ years, earning global respect and recognition. In late 2018, he announced via Instagram that the crew’s next show, in London, would be their final gig (after the show was already sold out), and he was leaving the music scene. He reasoned that he wanted to spend more time with his family, with a growing son and daughter to raise. During a recent interview with the Los Angeles Times, both members of the group seemed ready to give up the necessary grind that comes from touring and the energy needed to properly promote a hip-hop group in the late ’10s.

Truthfully, this move was close to a decade in the making. In 2009, PUTS recorded tracks about being ready to hang it up. A crew with a very traditional hip-hop sensibility built on dope rhymes and beats, they have seemed increasingly uncomfortable with the evolving musical landscape where social media presence is just as, if not more important than the music itself. When the group announced in 2015 that they would be releasing the three-volume series of EPs titled The Getting Off Stage, it was apparent they were laying the groundwork for their exit. The duo released Step 1 in late 2015 and Step 2 less than a year later, and Sincerely, The P appears to be a repurposed and expanded version of the third and final Step.

With Sincerely, The P, PUTS largely stick to their strengths. The album features the two rapping in a straightforward manner over well-constructed, head-nodding tracks. Sincerely, The P features many of the hallmarks of the group’s previous albums. There’s the return of the fictitious radio station WRLA and its very ’80s radio jingles. Long-time homie Blue Foot makes his scheduled appearance. Members of the Crown City Rockers contribute their live musical talents throughout the album, and the group’s Kat Ouno contributes a keyboard solo to the album’s final track, as she has on all of their albums since Stepfather (2006). However, there’s also an undercurrent of contempt for the current representation of hip-hop in popular culture.

The crew starts at the end with “Encore,” which would surely be a crowd pleaser if the group had any shows scheduled in the future. The “West Coast’s best producers that straight looped it” barrel into the album ready to rock on the string-driven, head-knocking jam. “The opposite sound dominates the soundscape,” Thes proclaims. “But we been breaking breaks while Drake manscapes.”

Though PUTS are best known for their cool-out music, they’re known to get a little rugged at times, as they demonstrate on Sincerely, The P. The track “Hard” sports the feel that its title suggests, invoking mid-’80s Mantronix-esque hip-hop, with Double K utilizing a flow that’s reminiscent of both Greg Nice and Melle Mel. “Streetsweeper” pounds with musical and lyrical aggression, as the pair hit the steel-drum laced track with super-charged energy.

The pair still have a few tricks up their sleeves that they deploy for Sincerely, The P. The awesomely titled “The Effects of Climate Change on Densely Populated Areas” has Thes and Double K giving first person accounts of a lengthy Los Angeles heat wave and their efforts to navigate the tensions that arise among the city’s subsequently short-tempered residents. “Stars in the House” has the pair rapping at a double-time tempo (something they’ve never done before on record) over a shuffling yet spacey keyboard-driven track. The song becomes a family affair, as Thes’ daughter provides some vocals and a guitar solo to end the track.

The duo uses the final stretch of Sincerely, The P to emphasize the importance of family and their loved ones. “Letter To My Son” is a sequel of sorts to Fun-DMC’s “A Baby.” Thes imparts life lessons to his now 10-year-old, reminding him to “Defend those who need help, respect and communicate / Celebrate diversity and raise your arms up against hate.” Thes’ son Sai is an aspiring musician in his own right, playing the sax during the song’s intro. On “Family Ties,” the two actually rhyme over a sample of the theme song to the TV show of the same name (word to Alex P. Keaton) about growing up around an eclectic collective of relatives and loved ones.