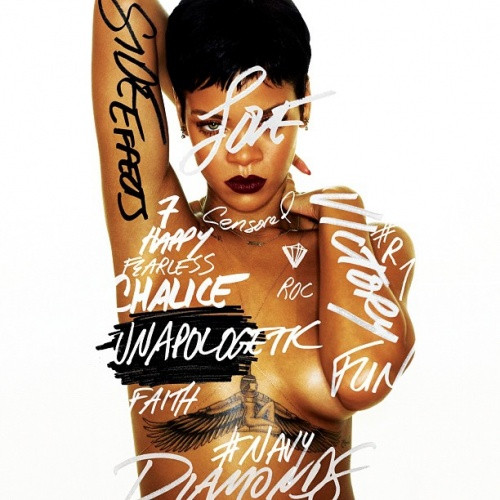 Not only is Unapologetic just as varied as Rihanna's past albums -- it's another timely refresh of contemporary pop music -- but it's a little more exploratory and a whole lot deeper, too. Continuing the trend that began on Rated R, Rihanna's at her best when she's flaunting. This goes for "Pour It Up," a characteristically chilly and booming Mike Will collaboration that might as well be a sequel to "Bandz a Make Her Dance," the producer's hit with Juicy J. Wrapped in a serene sneer, Rihanna's trash talk is something else. Moments such as that one are so convincing that the few everywoman heart-on-sleeve songs -- with the exception of the massive, slamming, wailing power ballad that is "What Now" -- don't sound all that natural.

Two of the album's most intriguing, contrasting, and not-so-everywoman tracks appear consecutively during the latter half. Both of them were written and produced by Terius "The-Dream" Nash and Carlos "Los" McKinney. "Nobody's Business," flecked with elements from Michael Jackson's "The Way You Make Me Feel," is a beaming if somewhat belligerent disco-house duet with Chris Brown. Rihanna's partner proposes to make out in a Lexus prior to proclaiming that the relationship "ain't nobody's business." The celebration is followed by "Love Without Tragedy/Mother Mary," conjoined songs with a wide theatrical scope akin to that of the-Dream's own "Nikki, Pt. 2/Abyss." Over a swelling and receding production with echoes of Kim Carnes' "Bette Davis' Eyes," Rihanna mourns ("Felt like love struck me in the night/I pray that love don't strike twice"), then confesses ("Mother Mary, I swear I wanna change"), then surrenders ("I'm prepared to die in the moment"). Perhaps no one should read anything into it. The same could be said of "No Love Allowed," which comes along a little later.