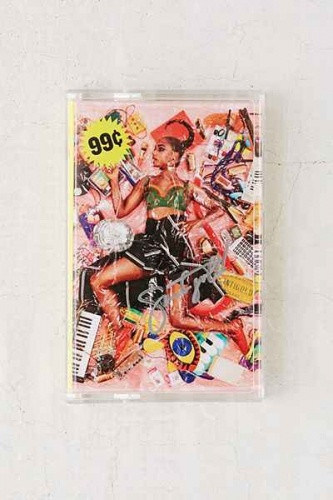 cassette version - The cover of Santigold's 99¢ shows Santi White as she's shrink-wrapped tight like a Barbie doll amid a candy-colored clutter of lifestyle accessories. Smacked right onto the cheapo cellophane, a yellow price tag declares the album's title, as if found in a dollar bin — or, perhaps, taking a clever dig at the cost of a single song. But as the singer, producer and fashion-forward mastermind makes clear throughout the album, the photo is also a statement about how each of us commodifies our image and namesake into a manicured, marketable brand, suitable for consumption.

From the beginning, Santigold has threaded the needle between engaging with the mass pop-culture machine and critiquing it with an outsider's remove. In early songs like "L.E.S. Artistes," White — who for a time worked as a major-label A&R rep, wrote songs for pop stars and fronted the punk band Stiffed — called out New York's trendiest scenes for being more enamored with optics than making art with lasting value. Later, on 2012's Master Of My Make Believe, and especially its ecstatic single "Disparate Youth," she alludes to revolutionary movements in world politics.

Following a hiatus and the birth of her son, White sought to create a collection of fun, playful songs that reveal even more of her personal voice. With 99¢, her third and finest album yet, Santigold presents a joyfully danceable record that shape-shifts between Technicolor electronic pop, brooding R&B and noisy arena-rock. She then savvily embeds themes of vulnerability and heartbreak, as well as outspoken ideas on art and commerce, identity and authenticity, and femininity.

99¢ kicks off with the head-bobbing "Can't Get Enough Of Myself," in which White examines selfie-centric celebrity culture, then flips its script and proudly deems herself worthy of admiration and self-love. "All I want to do is what I do well / Ain't a gambler but, honey, I'd put money on myself / All I want to do is bottle it to sell / 'Cause my brand of vainglory is much better for your health," she declares in the song's soulful, summery chorus. Paired with "Big Boss Big Time Business," a bass-heavy banger full of clattering, syncopated beats, Santigold unleashes a swaggering feminist rallying cry to stand up to anyone who challenges her agency and power. "Make me your mark and I'll take you one by one," she asserts, as if busting through the door and taking what's hers.

Santigold's songs are also defined by cutting-edge beats and globe-spanning influences, and 99¢ assembles another star-studded team, including frequent collaborators John Hill and Dave Sitek, as well as producers and co-writers like Vampire Weekend's Rostam Batmanglij, Patrik Berger, Hit-Boy, Zed's Dead and ILoveMakonnen, and many more. It's a crowded cast, each shaping songs with a unique sonic fingerprint — from the reggae-esque singalong of "All I Got" to the glossy voguing of "Rendezvous Girl," the rubbery Afro-Latin dance-floor groove of "Banshee," the lackadaisically off-key melody of "Who Be Lovin' Me," and the slow-building synth ballad "Run The Races." But even with the expansive, mix-and-match aesthetic, there's remarkable cohesion of vision with Santigold at the helm.

Among the strongest songs, "Chasing Shadows" is refreshingly stark, constructed around a plinking piano that places the focus on Santigold's nuanced vocal and phenomenal verbal dexterity. Words fly off her tongue with rapid-fire precision in lines like, "I give 'em my heart in words, will they remember me? / I'll leave 'em alone, and time'll want to smother what I say."

The album closes with the dynamic, empowering arena anthem "Who I Thought You Were," which channels the soaring guitars of David Bowie's "Heroes," the shimmering synths and disco-inflected rock of LCD Soundsystem, and the sneering attitude of Siouxsie Sioux. All the hair-raising hooks complement an outrageously satisfying kiss-off, as Santigold takes down a former love for his fake hotshot persona: "Hey, now, take a look at you / Hosed down in a million-dollar suit / But I knew you when that wasn't you / I knew you when you had a clue."

Santi White has remained at the forefront of pop innovation while operating just left of its mainstream. As 99¢ demonstrates, she's at her best and most comfortable when she's pushing toward something unexpected.A1 Can't Get Enough Of Myself
A2 Big Boss Big Time Business
A3 Banshee
A4 Chasing Shadows
A5 Walking In A Circle
A6 Who Be Lovin' Me
B7 Rendezvous Girl
B8 Before The Fire
B9 All I Got
B10 Outside The War
B11 Run The Races
B12 Who I Thought You Were