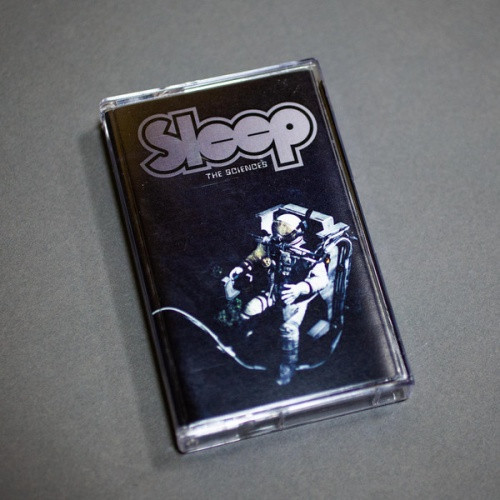 2018 Cassette Store Day release - Plenty of bands have struggled with the daunting task of following up an obvious masterpiece, and stoner rock heroes Sleep unwittingly handled this matter in an inspired fashion. Thanks to protracted battles with their record company, Sleep ended up breaking up before their magnum opus, the 63-minute single-song album Dopesmoker, would belatedly see the light of day. (It was recorded in 1994, but went unreleased in non-bootleg form until 1999.) Thanks to persistent word of mouth in the stoner/doom community, the legend behind the band and the record grew steadily in the years that followed, enough so that Sleep reunited to play some festival dates in 2009. Since then, Sleep have slowly but steadily returned to being a working band, and 2018's The Sciences, their first full-length effort since Dopesmoker, is less of a follow-up to that obsessive triumph than a victory lap, a consolidation of their strengths confirming this trio still has the vision and the muscle to bring their distinctive sound to life. As always, Sleep's twin guiding lights are marijuana and Black Sabbath, and these two great loves provide the foundation for this album, with guitarist Matt Pike generating massive towers of Tony Iommi-inspired riffs as the lyrics artfully describe how to smoke reefer in esoteric ways that even surpass the fables of the Weedian People in Dopesmoker. The slow, thundering plod of this music could easily become monotonous, but Pike is able to bring just enough detail and shading into his deafening guitar work to keep this music compelling, and bassist Al Cisneros and drummer Jason Roeder generate a great roiling sea of bottom end, carrying the songs even as they stretch into 12- or 14-minute jams. (Of course, after the 63-minute marathon of Dopesmoker, anything under 15 minutes is probably a cakewalk for these guys.) And while Sleep haven't tried to re-invent their own particular wheel here, the spacier mood and Eastern accents of "Giza Butler" (what did I tell you about their Sabbath references?) and the environmental concerns of "Antarcticans Thawed" suggest the band is slowly but gradually adding new colors to their palette. The Sciences may not be as daring and ambitious as Dopesmoker, but it finds Sleep working at the top of their game in the studio, and their resinous howl is still a weird marvel to behold. If you're looking for a king-size dose of heavy, The Sciences is what you need.