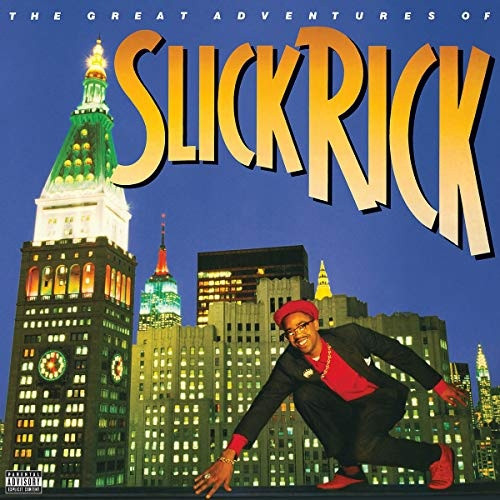 2019 Urban Legends reissue on double vinyl!! Slick Rick's reputation as hip-hop's greatest storyteller hangs on his classic debut, The Great Adventures of Slick Rick, one of the most influential rap records of the late '80s -- for better and worse. Most of the production is standard early Def Jam, but Rick's style on the mic is like no one else's. His half-British accent and odd, singsong cadences often overshadow the smoothness of his delivery, but there's no overlooking the cleverness of his lyrics. His carefully constructed narratives are filled with vivid detail and witty asides, and his cartoonish sense of humor influenced countless other rappers. He'll adopt a high voice for his female characters, and even duets with his old alter ego MC Ricky D on "Mona Lisa." But there's also a dark side to The Great Adventures -- namely its vulgarity and off-handed misogyny. No MC had ever dared go as far on record as Rick, and the tracks in question haven't really lost much of their power to offend, or at least raise eyebrows. The notorious "Treat Her Like a Prostitute" is the prime suspect, undermining well-intentioned advice (don't trust too quickly) with cynical, often degrading portrayals of women. "Indian Girl (Adult Story)," meanwhile, is an X-rated yarn with a barely comprehensible payoff. Yet this material is as much a part of Rick's legacy as his more admirable traits, and he was far from the last MC to put seemingly contradictory sides of his personality on the same record. And it's worth noting that most of his Great Adventures, no matter how dubious, end up as cautionary tales with definite consequences. That's especially true on the tragic "Children's Story," in which a teenage robber's increasingly desperate blunders lead to his destruction. In the end, The Great Adventures is simply too good not to deserve the countless samples and homages by everyone from Snoop Dogg to Black Star.