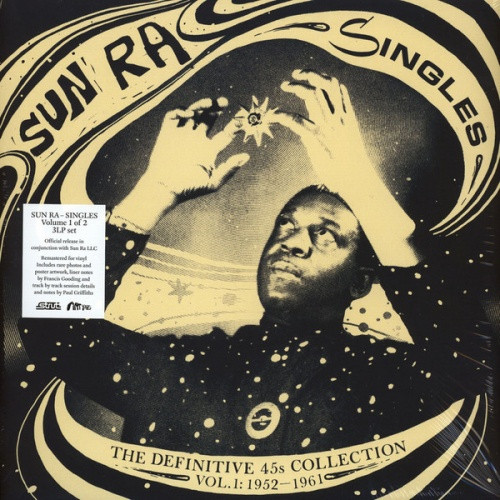 Strut present the definitive collection of singles released by Sun Ra across his illustrious career, spanning 1952 to 1991. Released prolifically during the 1950s and more sporadically thereafter, primarily on the Saturn label, the 45s offer one-off meteorites from Ra’s prolific cosmic journey, tracing the development of his forwardthinking “Space-Bop” and his unique take on jazz and blues traditions. The collection is hugely varied, ranging from Ra’s spoken word recitations and his early work with Chicago vocal groups to the different phases of his Arkestra, small group and duet recordings.

The singles are also unpredictable vehicles for Ra’s music, combining different tracks from different sessions and occasionally making available music which was recorded many years beforehand. As with his LPs, most 45s were only pressed in small runs and have since become extremely rare and sought after. Only a small handful of copies of ‘Love In Outer Space’ b/w ‘Mayan Temple’ and ‘The Blue One’ b/w ‘Orbitration In Blue’ have ever been seen; some have only been discovered in physical form in recent years; some were planned and pencilled but allegedly never made it to vinyl (including ‘Saturn’ and ‘Velvet’ from the Jazz In Silhouette LP) and some appeared as limited one-off magazine singles and posthumous releases, including ‘Hell #1’ aka ‘Out There A Minute’. The set is the most comprehensive collection of Ra’s singles to date.