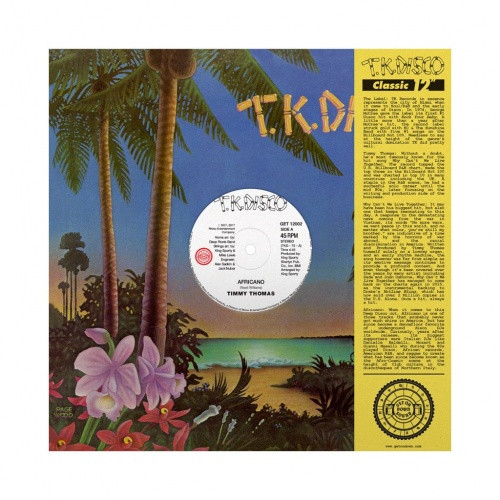 The Label: TK Records in essence represents the city of Miami when it came to Soul/R&B and the early stages of Disco. In 1974, George McCrae gave the label its first #1 Disco hit with Rock Your Baby. A little more than a year after McCrae's hit, the record label struck gold with KC & The Sunshine Band with five #1 songs on the Billboard Hot 100. Needless to say at the height of the genre's cultural domination TK did pretty well.

Timmy Thomas: Without a doubt, he's most famously known for the hit song Why Can't We Live Together. The record topped the U.S. Billboard R&B chart, made the top three in the Billboard Hot 100 and was charted in top 10 in many countries including the UK. A staple in the R&B scene, he had a succesful solo career until the mid 80s, later focusing on the writing and production side of the business.

Why Can't We Live Together: It may have been his biggest hit, but also one that keeps resonating to this day. A response to the devastating news coming from the war in Vietnam, its words "No more wars, we want peace in this world, and no matter what color, you're still my brother." are indicative of a time marked by the horrors of war abroad, and the racial discrimination in America. Written and Produced by Timmy Thomas himself solely on a Lowrey organ, and an early rhythm machine, the song however was far from simple as its emotive message continues to provide a profound context. And even though it's been covered over the years by many artist including Sade and Joan Osborne, Why Can't We Live Together has managed to come back on the charts again in 2015, as the instrumental backing to Drake's Hotline Bling, which has now sold over 2 Million copies in the U.S. Alone. Once a hit, always a hit.

Africano: When it comes to this Deep Disco cut, Africano is one of those tracks that probably never got much shine in America, but has since become a dancefloor favorite of underground disco DJs worldwide. Curiously, years after its release, its biggest supporters were Italian DJs like Danielle Baldelli, Mozart and Gianni Maselli who during the 80s played Disco, African records, American R&B, and reggae to create what has been since become known as the Afro-Cosmic scene at the height of Club culture in the discothèques of Northern Italy.

Part of the Get On Down Sound vinyl series with the aim to bring back their favorite Dance 12-Inches to a new generation of Vinyl-DJs. Re-mastered for optimal club use, these are official re-issues of some of Dance Music's most influential cuts.