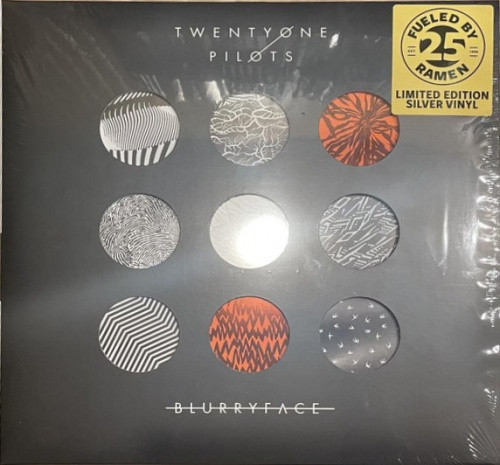 NOTE: jacket has a creased corner but VINYL IS MINT & SEALED

2021 reissue on silver vinyl - Grappling with the forces of dark and light that rage within, Twenty One Pilots make inner turmoil sound thrilling on their sophomore major-label LP, Blurryface. Named after the menacing character that represents the negative in vocalist Tyler Joseph's life, Blurryface is a genre-blending grab bag of styles that sounds like a soundtrack from multiple artists. Reggae and dub, industrial and drum'n'bass, indie rock and rap. They're all included on Blurryface, where abrupt stylistic changes are exciting without being jarring. In addition to the hit singles "Ride" and "Stressed Out" -- which tackle millennial angst and relatable life struggles -- Blurryface is packed with self-aware lyrics, clever observations, and deep introspection. While its predecessor, Vessel, hinted at the fearless experimental side of the duo -- which also includes drummer Josh Dun -- it was ultimately more precious and innocent. Keeping with the "blurryface" threat, this album is darker and, despite the addictively catchy nature of the music, more serious. Joseph struggles with his demons throughout -- fear and anxiety seep through "The Judge," while the conflict rages on "Doubt" and self-doubt and regret plague "Polarize" -- until catharsis is achieved on "Goner," where Joseph sings "I've got two faces/Blurry's the one I'm not." It's an emotional ride buoyed by a constantly shifting sonic palette. Despite the intensity of some of the lyrics, when one focuses strictly on the music, it's a party. The reggae influences abound (nearly half the album includes some kind of laid-back dub beat) and Joseph strums his ukulele to effective measure on "The Judge" and "We Don't Believe What's on TV." The pair also flirts with electronic dance beats on highlights "Heavydirtysoul" and the New Order-ish ode to Columbus, Ohio, "Hometown." This may sound like a confused mishmash of ideas from two guys who can't seem to focus, but in the 2010s -- when so many genres rubbed elbows in the Top 40 -- it ends up being a natural product of the very environment where it was spawned. Twenty One Pilots tap into both the emotions and musical proclivities of restless youth in 2015, resulting in an effort that sounds both of its time and also completely futuristic. 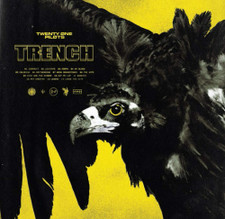