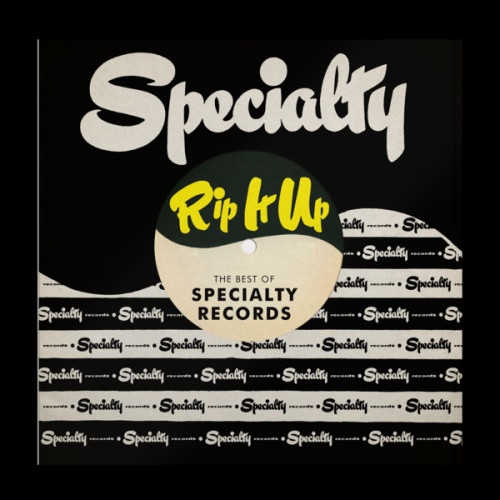 Various Artists - Rip It Up: The Best Of Specialty Records - LP Vinyl

Craft Recordings is pleased to launch its 75th-anniversary celebrations of Specialty Records with a brand-new compilation, Rip It Up: The Best of Specialty Records. The album collects 18 rock ’n’ roll, R&B, soul, and blues hits from such pioneering artists as Little Richard, Sam Cooke, and Lloyd Price, and includes liner notes from the GRAMMY®-winning writer and musician, Billy Vera.

In the 1940s, Los Angeles reigned as the entertainment capital of the world. But while the postwar movie business was booming, the recording industry was just finding its footing in the city. It was at this time that a young impresario named Art Rupe arrived in Hollywood and was eager to get involved in the growing scene. As an avid fan of gospel, blues, and the burgeoning sounds of R&B, Rupe noticed that many of the bigger labels weren’t focusing their efforts on Black artists. Instead, they were signing acts that would appeal to white audiences.

Rupe sought to change this with his label, Juke Box (soon to be re-named Specialty Records). Among his earliest signings was a local bandleader named Roy Milton. In 1945, Milton scored a major hit with “R.M. Blues.” As Vera explains in his notes, Milton was laying the groundwork for a fresh new sound. “The fact that Roy was both the drummer and singer gave his records another unexpected attraction. Roy’s vocal mic picked up leakage from the snare drum, emphasizing the backbeat [that] would later become the core sound of rock ’n’ roll.”

One of Specialty’s most reliable stars, Milton would go on to score 19 Top Ten R&B singles during his time with the label. His success also attracted new artists to the imprint, including Jimmy Liggins, whose uptempo boogies like 1953’s “Drunk” were also precursors to rock. Liggins’ brother Joe, a popular blues pianist, joined the label as well, releasing hits like the swinging “Pink Champagne” (1953).

Other signings included the prolific blues singer-songwriter Percy Mayfield, who famously penned Ray Charles’ “Hit the Road Jack.” A decade earlier, he launched his career at Specialty, releasing his first No.1 R&B hit, “Please Send Me Someone to Love.” A teenage Lloyd Price (who later crossed over to the pop charts with “Personality” and “Stagger Lee”) also got his start at Specialty, scoring a chart-topping R&B hit with his oft-covered debut, “Lawdy Miss Clawdy.” Additionally, Rupe jumped on the rising popularity of doo-wop, signing the vocal duo Jesse & Marvin (comprised of Jesse Belvin and Marvin Phillips).

Rupe certainly proved that he had a keen ear for talent, but one of his signings—a young, flamboyant performer named Richard Penniman—would forever change the landscape of pop music. Bursting onto the scene with 1955’s “Tutti Frutti,” Little Richard, as he was known, became an instant crossover sensation and a rock ’n’ roll pioneer. Over the next two years, Richard dominated the charts with hits like “Long Tall Sally,” “Rip It Up,” “The Girl Can’t Help It,” “Lucille,” and “Good Golly, Miss Molly.

“Richard Penniman is the artist who made Specialty and rock ’n’ roll synonymous,” argues Vera, who adds that more than 60 years later, his songs “sound [just] as wild and out of control.” Under Specialty, Richard released three albums (including his 1957 debut, Here’s Little Richard) and scored more than a dozen Top Ten R&B hits—many of which also landed in the Billboard Hot 100’s Top Ten. Along the way, the charismatic artist appeared in several top-grossing films, including 1956’s The Girl Can’t Help It and Don’t Knock the Rock. In 1958, however, Richard abandoned stardom to devote his life to the gospel.

Rupe scrambled to replace his biggest star with the similarly flashy Larry Williams—a favorite of the Beatles and the Rolling Stones. He also poured his energies into a promising young singer named Sam Cooke, who fronted The Soul Stirrers—a long-running gospel group that had released several records with Specialty. Cooke’s “I’ll Come Running Back to You” followed the success of his debut “You Send Me” (via Keen Records), and earned the singer his second chart-topping R&B hit.

Bolstering Rupe’s efforts along the way was Robert “Bumps” Blackwell—a bandleader who shaped the sound of the label as an A&R man, producer, and arranger. At Specialty, Blackwell steered the early careers of Little Richard, Larry Williams, Sam Cooke, and Lloyd Price. In the following years, he went on to work with the likes of Sly and the Family Stone and Bob Dylan.

Despite the label’s overwhelming success, Rupe found himself disenchanted with the music industry and effectively shut down Specialty in 1959. What he accomplished in a decade and a half, however, was extraordinary. While his impact on popular music was immeasurable, one of Rupe’s most important contributions was his effort to champion Black artists and break down the racial barriers that pervaded the music industry.

Rupe, who turns 104 in September, was honored by the Rock and Roll Hall of Fame in 2011 with the Ahmet Ertegun Award, which celebrates non-performing industry professionals who have had a significant influence on “the creative development and growth of rock ’n’ roll and music that has impacted youth culture.” To that end, Vera simply declares, “the name Art Rupe should be spoken with the same reverence as any of the giants: Sam Phillips, Ahmet Ertegun, Jerry Wexler, or Leonard Chess.”