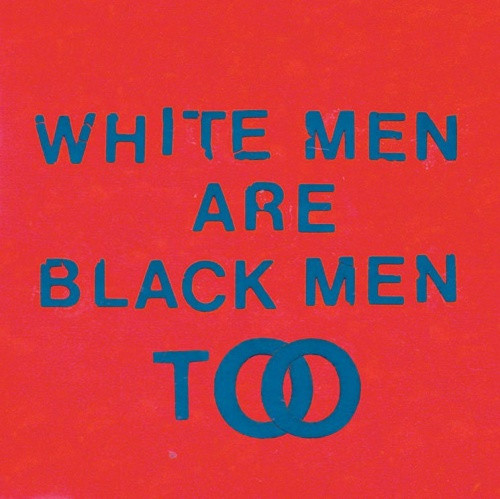 Young Fathers - White Men Are Black Me Too - LP Vinyl

Let’s get that title out of the way first: White Men Are Black Men Too. And then the sticker on the vinyl and CD: ‘file under Rock and Pop’. You probably want to know what that’s doing there, right? Where does a group like Young Fathers, who pick n' mix from the popular music sweet shop and fly no flags and swear allegiance to no country’ (© - 100 interviews with the group in 2014) - where do they go? They have to go to the place where Beck makes a sandwich with The Beach Boys and Captain Beefheart, where Faust and The Fall tango. For the purposes of this mission, this album, this White Men Are Black Men Too, is rock and pop. And hip hop, too. (Whoops, slipped out). This sticker is only for the business. The listeners can decide for themselves. The sounds are closer on this album, closer to your ears. These hooks, they stay with you. There are less words than before. 2014 was an interesting year for the group. Yep, awards etc and they played around 130 shows, from Paris to Sydney, via both Portlands and Paisley, too. The album found itself being recorded in a hotel room in Illinois, a rehearsal room in Melbourne, a freezing cellar in Berlin, a photographic studio in London and their normal hole in the ground basement in Edinburgh. These are grown men, battle fit and in their prime. There are no celebrations of dole queue theatre, no fake politics - there’s no need. Synaesthetically, it’s a hue of a reddy blue with a touch of yellow, like most things. Which is, of course, the colour of the future.