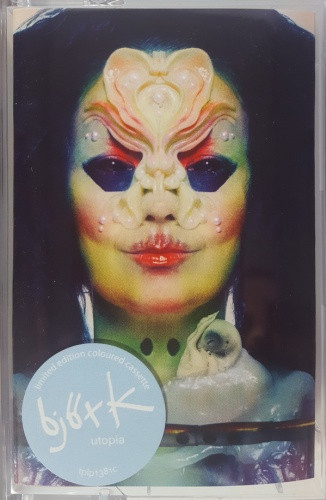 ‘Utopia’ is the ninth studio album from the iconic artist Björk - the album's artwork was created in collaboration of M/M, Jesse Kanda and James Merry and reflects the records sonic direction; optimism, lightness, utopia. The album is written by Björk with five of the 14 songs co-written by Arca and one of the songs co-written by Sarah Hopkins. All of the songs except one is coproduced by Arca. One of the songs is co-produced by Rabit. Björk formed a twelve piece Icelandic female flute orchestra, which she arranged for and conducted. She also wrote an arrangement for Hamrahlíðarkórinn, a choir conducted by Þorgerður Ingólfsdóttir. The album was edited and structured by Björk on Protools. It was engineered by Bergur Þórisson, Bart Migal and Chris Elms. It was mixed by Heba Kadry and Marta Salogni and mastered by Mandy Parnell. The album cover was created by Jesse Kanda, in collaboration with Björk, James Merry and makeup artist Hungry. The rest of the album artwork will feature new digital illuminations and typography from MM Paris. Of the album she explained to Dazed this Summer that, ““Maybe that’s why it became a utopian theme – if we’re gonna survive not only my personal drama but also the sort of situation the world is in today, we’ve got to come up with a new plan, If we don’t have the dream, we’re just not gonna change. Especially now, this kind of dream is an emergency.