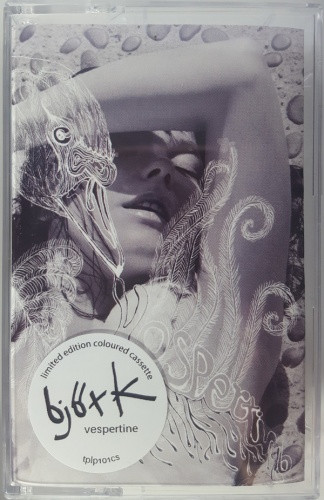 2019 reissue of 'Vespertine' with Magnolia-White cassette shell. Features revised sleeve art for the re-issue series. After cathartic statements like Homogenic, the role of Selma in Dancer in the Dark, and the film's somber companion piece, Selmasongs, it's not surprising that Björk's first album in four years is less emotionally wrenching. But Vespertine isn't so much a departure from her previous work as a culmination of the musical distance she's traveled; within songs like the subtly sensual "Hidden Place" and "Undo" are traces of Debut and Post's gentle loveliness, as well as Homogenic and Selmasongs' reflective, searching moments. Described by Björk as "about being on your own in your house with your laptop and whispering for a year and just writing a very peaceful song that tiptoes," Vespertine's vocals seldom rise above a whisper, the rhythms mimic heartbeats and breathing, and a pristine, music-box delicacy unites the album into a deceptively fragile, hypnotic whole. Even relatively immediate, accessible songs such as "It's Not Up to You," "Pagan Poetry," and "Unison" share a spacious serenity with the album's quietest moments. Indeed, the most intimate songs are among the most varied, from the seductively alien "Cocoon" to the dark, obsessive "An Echo, A Stain" to the fairy tale-like instrumental "Frosti." The beauty of Vespertine's subtlety may be lost on Björk fans demanding another leap like the one she made between Post and Homogenic, but like the rest of the album, its innovations are intimate and intricate. Collaborators like Matmos -- who, along with their own A Chance to Cut Is a Chance to Cure, appear on two of 2001's best works -- contribute appropriately restrained beats crafted from shuffled cards, cracking ice, and the snap-crackle-pop of Rice Krispies; harpist Zeena Parkins' melodic and rhythmic playing adds to the postmodernly angelic air. An album singing the praises of peace and quiet, Vespertine isn't merely lovely; it proves that in Björk's hands, intimacy can be just as compelling as louder emotions.